Sean Elwood has been a long time and major contributor to the screenwriting and SimplyScripts community. Never a fan of horror, Sean reintroduced me and taught me to appreciate some of the subtle nuances of the horror genre. Sean has just published his nineteen tales of horror and suspense available on Amazon*. You can also get more information about this and Sean’s other works on his website SeanElwoodArt.com 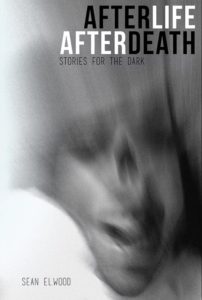 AfterLife AfterDeath: Stories for the Dark presents nineteen chilling tales that will creep beneath your skin and chill you to the bone, opening up some of the most primal feelings that every human being retains of death, darkness, and the fear of the unknown. Follow a man who returns to his childhood home after his motherâs suicide, only to discover something evil residing within it, and has been waiting for him to return; A dispatch operator receives a terrifying 911 call from a frantic woman who finds her entire family slaughtered; Three teens chasing an urban legend get more than they bargained for when the rumor ends up being true, and more than just a ghost story; A public channel broadcasts something strange to the residents of an apartment building, who begin to act even stranger; A horrific nightmare comes to life for a passenger on a plane traveling overseas. These stories will make you reconsider what truly lives in the darkest shadows of your home, and instill fears you thought you would never have. Turn the lights off!

*I am an Amazon affiliate and a small percentage of sales goes to support and keep SimplyScripts free.

A child must find a new home even if she has to make it herself.

This is a companion collection that can serve as an introduction to or more information about The Mosaic.

It’s a book – The Mosaic by Chris Keaton

Chris has written a book. It’s ok. He’ll come back to screenwriting. It’s an experimental thing. Nothing to get freaked out about. Take a look at the ‘blurb. Maybe it’s your thing. Or not. It’s cool.

Secrets. It all started while looking for secret passages. Chloe Tozierâs impulsive twin, Zoe, insisted that all old mansions had them. Grandma denied the existence of any here. Except for the boarded-up service elevator that she conveniently forgot to mention before the girls discovered it, the elevator that didnât seem to go anywhere. They had been living in this private museum with their grandparents since the death of their parents during an archaeology trip to Egypt.

Mysteries. Why have a museum in a tiny town in the middle of Kansas when whatâs on display is nothing unusual? Sometimes packages arrived wrapped in plain brown paper that the girls never saw again. Grandpa disappeared overnight and they havenât heard from him since. And before going to Egypt their parents had mentioned something about a mysterious mosaic. Maybe Zoe was right about family secrets. Maybe it was time to dig further.

Anthony Cawood’s “How to… Sell Your Screenplay - post author Don

Anthony Cawood has taken his article series Youâve Finished the Damned Script â Now What? and updated it, expanded it and changed the title to How to… Sell your screenplay

Anthony has sold or optioned over forty shorts and one feature in the last three years, so he is probably doing something right.

Not sure you want to drop $2.99 on this, yet? Check out the eight-part article series upon which is book is based – Youâve Finished the Damned Script â Now What? – if you find a few things in there you didn’t know before, you might find his book even more useful.

Wheel of An Hero – How to make the most genius film by mistake. - post author Don

Simon Cathcart (writer and director of the wonderfully campy StagKnight has a new book out.

Wheel of An Hero – How to make the most genius film by mistake. Felix James had been living in an underground, airtight cell, in total isolation, for twenty five years. And all Max Gutman needed was $25 million to finance his feature film. But Max had to prove he could do it. Maybe shooting his first short film in a care home for people with severe learning difficulties wasn’t such a great idea. Until he met Felix James. Felix James had a rare terminal illness. Felix also had an idea for a show. A show that could easily make $25 million.

Journey to centre of the world’s first crowdfunded suicide machine as it rips through California taking out waitresses, cage fighters, hookers, journalists, gardeners, fundamentalists and hundreds more all playing this astounding game of monumental idiot savagery.

Film is the only art form which requires a lot of money to make it. A musician only needs an instrument, a painter paint, said Orson Welles. Having made films himself this subject was an obvious piece for Simon James Cathcart to reflect upon. Raising millions for any venture is not an easy task, ever. Today, the film industry has stalled in a state of sad confusion. It wrestles with the rise of the internet, remaining at all odds with it; rather than joining it. Media is now everywhere and everyone a walking filmmaker. Entertainment is now abundant – time short. Combine this with the advent of crowd-funding.

Wheel of An Hero enabled me to push the hidden pressures a director suffers from and a film crew in motion while the wheels are coming off.It enabled me to explore the archetypal situations, characters and places I’d been in with the possibilities of being over funded, coupled with the relentless demands of a largely desensitized youth market watching live and I was able to take it to levels I’d never even anticipated.

Read the first chapter on WattPad or buy the book on Amazon.

Permalink | Comments Off on Wheel of An Hero – How to make the most genius film by mistake.

Some of you may remember Jason Henderson. He was on SimplyScripts Radio last year. The second in his Alex Van Helsing series comes out today.

Update: Thanks to Darren for joining in as the “audience” You can listen to the podcast here:

Permalink | Comments Off on Jason Henderson’s Alex Van Helsing: Voice of the Undead is now available – for real this time –

Some of you may remember Jason Henderson. He was on SimplyScripts Radio last year. The second in his Alex Van Helsing series comes out on July 26th.

In the mean time, Jason is hosting a live podcast with comic writers Drew Edwards and Tony Salvaggio on the Castle Dracula Podcast on Monday, June 27th at 10:30 edt. You can listen in and toward the end of the hour, they’ll open it up for questions.

The panel talks to Pamela Jaye Smith about the tools of story telling and applied mythology.

You can check out Pamela’s site at PamelaJayeSmith.net. Pamela is the author of Beyond the Hero’s Journey

******************
SimplyScripts Radio is produced by Michael Cornetto and released under a Creative Commons Attribution Non-Commercial No Derivatives 3.0 license.

This episode the panel consisted of host, Michael Cornetto and panel members Pia and Don

Please, we’d love to have feedback on the show. A young tailor evolves into a different person and finds himself in the midst of an ancient war. Fempiror (pronounced fem-PEER-or) are a race created for a war in a country long forgotten. Like a science experiment gone awry, they share an incurable condition that gives them superior speed, strength, and lifespan, but sacrifices a life in the sun and a sense of normalcy with the rest of humanity. In 1775, at the age of 17, David Taylor is thrust into this new world of the Fempiror when he disobeys a decree against being out at night to be with his beloved, Beth. Now, he is forced to follow a new set of laws – to protect humanity from the dark side of the Fempiror race. Unfortunately, their laws prohibit him from seeing Beth again – a rule David is not interested in keeping. As David encounters advanced technologies of the Fempiror society, learns of their mission, and understands the very real danger he poses to humanity, he begins to second guess his desire to return to Beth. But when that opportunity arises, he disobeys and changes his life and the lives of everyone he loves. George Willson is from Broken Arrow, Oklahoma. He has written over sixty plays, musicals, shorts, screenplays and teleplays, of which four have been produced. He plays piano, drums, bass, guitar, trombone, saxophone, and clarinet (among several others). He regularly writes songs to perform in a small group he plays piano and sings with. He produced and directed a feature length screenplay which he also edited and wrote the music for. The Fempiror Chronicles: The Initiation of David is his first novel.

Permalink | Comments Off on The Fempiror Chronicles: The Initiation of David: Chapter Six – Erim