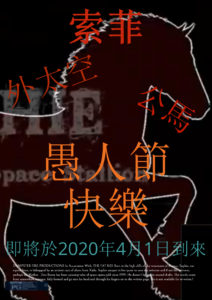 Born in the high cliffs of the mountains of Kansas, Sophie, our equine hero, is kidnapped by an ancient race of aliens from Xadu. Sophie escapes in her quest to save the universe and if not the universe, perhaps his Mother.

Slowly, but slowly making progress on getting Sophie to theaters. We finally have the international release poster completed. It’s been a long four weeks, but we think that now that our graphic artist has completed all four MS-Paint classes, the wait was worth it.
Last year we released the placeholder, pre-pre-vis teaser trailer. There is still a lot of placeholder footage and placeholder dialogue and placeholder music, but this pre-vis teaser trailer occupies the same space as the official teaser trailer will occupy when it is done.
We’ve had a lot of re-shoots over the past year as the previous footage was lost to a dumpster fire when the director of photography and most of the actors rage quit due to the fact that their mouths were unable to correctly form the words in the order that were written. And, some of them wanted to be paid. In money.

About the writer: Don Boose has been spinning tales of space opera gold since 1999. Everything he touches turns to crap. He doesn’t believe in second drafts. The words come from somewhere in space, fully formed and go into his head and through his fingers on to the written page. He is not available for re-writes.

Sophie’s been produced!!!!! Congratulations! I remember when this only existed in script form.

YEEHAW! I’ve been chompin’ at the bit to see Sophie in action! I heard rumor that Daniel Craig may have signed on to the project?

One day late to the party it seems, but again…
Wow! ð